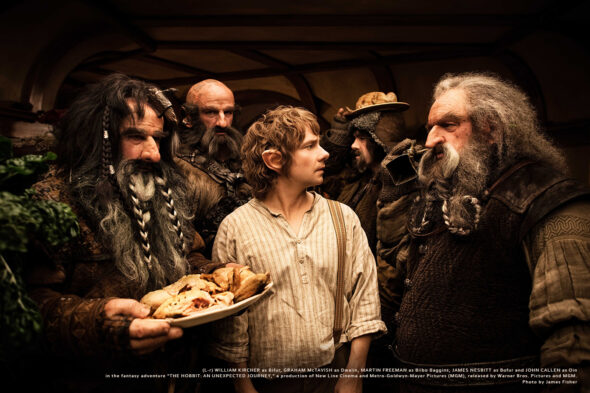 Tickets for The Hobbit Trilogy are now on sale and can be purchased online by visiting www.FathomEvents.com, or at participating theater box offices. Fans throughout the U.S. will be able to enjoy the event in more than 500 movie theaters. For a complete list of theater locations visit the Fathom Events website (theaters and participants are subject to change).

The Hobbit: An Unexpected Journey (2012) – Monday, October 5, 2015 at 7:30 p.m.
The Hobbit Bilbo Baggins, who—along with the Wizard Gandalf and 13 Dwarves, led by the legendary warrior Thorin Oakenshield—is swept into an epic quest to reclaim the lost Dwarf Kingdom of Erebor from the fearsome Dragon Smaug.  Along the path, the unassuming Bilbo Baggins not only discovers depths of ingenuity and courage that surprise even him, he also gains possession of a “precious” ring tied to the fate of all Middle-earth in ways he cannot begin to know.

The Hobbit: The Desolation of Smaug (2013) – Wednesday, October 7, 2015 at 7:30 p.m.
The Hobbit Bilbo Baggins, the Wizard Gandalf and 13 Dwarves, led by Thorin Oakenshield, continue their journey to reclaim the Dwarf Kingdom of Erebor.  Along the way they encounter the skin-changer Beorn, giant Spiders of Mirkwood, Wood-elves led by Legolas, Tauriel, and King Thranduil, and a mysterious Man named Bard, who smuggles them into Lake-town.  Finally reaching the Lonely Mountain, they face their greatest danger – the Dragon Smaug.

The Hobbit: The Battle of the Five Armies (2014) – Tuesday, October 13, 2015 at 7:30 p.m.
The Dwarves of Erebor have reclaimed their homeland, but now must face the consequences of having unleashed the terrifying Dragon, Smaug, upon Lake-town.  As Thorin sacrifices friendship and honor under the weight of his reclaimed wealth, Bilbo is forced to make a desperate and dangerous choice, not knowing that even greater perils lie ahead—Sauron, the Dark Lord, has returned to Middle-earth.  As darkness converges on their escalating conflict, the races of Dwarves, Elves and Men must decide—unite or be destroyed.  Bilbo finds himself fighting for his life and the lives of his friends as five great armies go to war.

“We are excited to give fans the first chance to see the extended editions of this Trilogy in cinemas,” said Fathom Events CEO John Rubey. “The incredible cinematography and action in each feature will be even better on the big screen and will give Hobbit fans a chance to binge-watch as a community!”