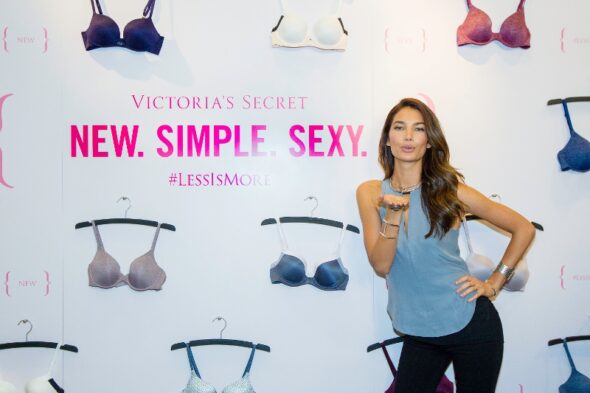 Victoria’s Secret Supermodel Lily Aldridge celebrated the reveal of the highly anticipated What Is Sexy?List yesterday at the Powell Street store in San Francisco. This year, sexy is all about LESS IS MORE. The 2014 What Is Sexy? List honors the hottest and most inspiring women in Hollywood who embody a simple, casually confident lifestyle. From Sexiest Street Style to Sexiest Natural Beauty, the women who made the list are all about maximum impact with minimal effort and no filter needed:

Plus, the two winners for the Fan Voted categories are:

Inspired by the What Is Sexy? List, Victoria’s Secret also celebrated the launch of the new, simple and sexy collections of bras, including the Incredible, Fabulous, T-Shirt Bra and Unlined styles. Incredible by Victoria’s Secret is the most comfortable collection of bras with smooth cups and fully adjustable straps. The Fabulous Bra comes in multiple silhouettes with lightweight padding. The T-Shirt Bra collection has a softer touch with a bit of lift for a natural shape, while the Unlined styles are made with sheer, mesh lining for a more fashion forward, and sexy look. The new bra collections range in sizes from A-DDD and come in an array of fall colors including black, olive, navy, rich grape and more. Victoria’s Secret also introduces a sexy and simple fragrance, Eau So Sexy. The new fragrance is a fresh scent that makes it ideal for everyday and the perfect match for the new, simple and sexy bras.

LOS ANGELES — Nicole by OPI announced today that the brand will be producing three custom nail lacquer shades for Kellogg’s(®) Special K(®) beginning in April to pair with a campaign encouraging women to “show off your confidence with color.” Shoppers will have the opportunity to receive free full-size bottles of Nicole by OPI nail lacquer by signing up for the Kellogg’s Family Rewards program and entering codes from specially marked boxes of Special K products, while supplies last.

“Nicole by OPI is delighted to partner with Kellogg’s to offer such an exciting reward to Special K consumers,” says Suzi Weiss-Fischmann, Nicole by OPI Executive VP & Artistic Director. “At our company, we always say that nail lacquer can change your look – and your outlook. In working with Kellogg’s Special K, we hope to inspire and motivate women who are striving for beauty both inside and out.”

This promotion will be available in the US only where Special K products are sold.

Victoria’s Secret launches the sizzling swim 2013 collection, which coincides with the release of the brand’s coveted swim catalogue. The first of four highly anticipated 2013 Victoria’s Secret Swim catalogues will hit mailboxes nationwide today. Shot by famed fashion photographer Russell James on the sunny beaches of Turks and Caicos and Miami, the catalogue features the sexiest swimsuits, inspired by old Hollywood, glamorous starlets and their chic escapes to the most luxurious destinations in the world. The brand, known for launching the careers of the most iconic supermodels in the world, has selected Angel Candice Swanepoel to appear on the cover of the first Swim catalogue cover of the year. The cover suit is the new Very Sexy Bandeau bikini, a retro inspired push-up bandeau available in an assortment of colors, prints and embellishment fabrics. Additional catalogues shot in Tulum and St. Barths will hit mailboxes throughout the season.

The trends featured in this year’s VS swim collection include embellishment, novelty fabrics, seductive prints, neon, and mix and match pieces. Customers can create their perfect suit by mixing and matching an array of colors, prints, styles and sizes to show off their personality and shape.

New this season – the world’s hottest musical artists will provide the soundtrack for the sexiest swim videos ever! The Angels & Artists video series features four swim videos, four red-hot tracks and the world’s most beautiful supermodels. The first video in the series, “Bikinis & Bruno Mars,” launches today featuring sizzling swim footage of Angels Candice Swanepoel and Doutzen Kroes – all set to the current #1 Bruno Mars smash “Locked Out of Heaven.” Additional videos featuring music by chart topping artists will be released throughout the swim season. Visit the “Angels & Artists” tab at www.VictoriasSecret.com/VSswim to watch all of the sexy musical collaborations. Consider heaven officially unlocked!

Candice Swanepoel was born in Mooi River, KwaZulu-Natal, South Africa. She has walked in the annual Victoria’s Secret Fashion Show since 2007 and can be seen in a variety of their print and television campaigns. Candice counts being featured on the cover of Victoria’s Secret Swim Catalogue as one of the highlights of her career. “It feels amazing being on the cover of the Swim catalogue! Before I was a model, I used to see Gisele [Bundchen], Tyra Banks and all of those iconic women on it. It is amazing that a little South African girl can get on the cover,” says Candice.