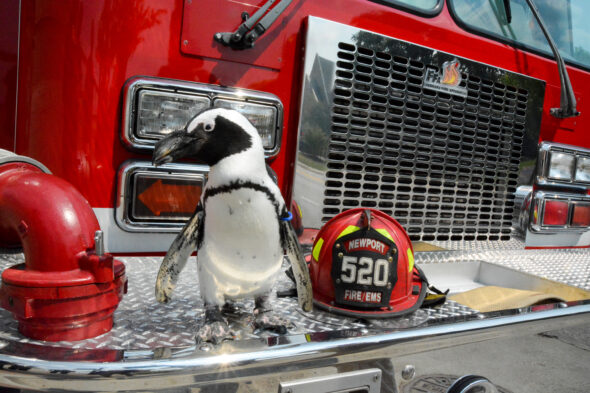 “The men and women working in law enforcement, firefighting and first-response professions are our heroes,” said Eric Rose, executive director of Newport Aquarium. “Fire and Safety Weekend is a way Newport Aquarium can show them our appreciation for everything they do for our communities.”

Also during Fire & Safety Weekend, family members and friends who accompany police, firefighters and first responders at the Newport Aquarium ticket window can receive discounts of $3 off adult and $2 off child (ages 2-12) admission. Family and friends must be present at the time the first responder orders their ticket in order to receive the Fire & Safety Weekend discount. 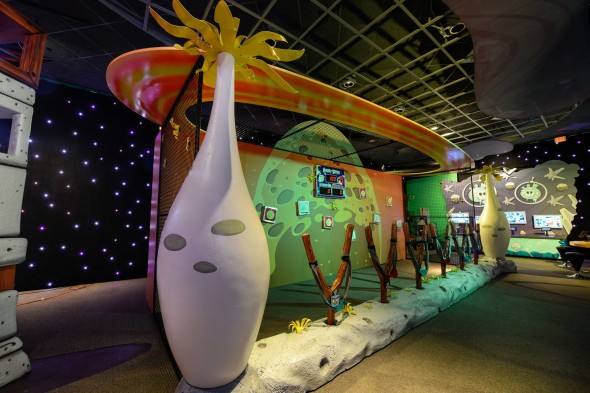 “Rovio is thrilled to partner with Kennedy Space Center Visitor Complex to bring this unique attraction to the fans of Angry Birds,” said Dan Mitchell, Rovio’s director of location-based entertainment, during today’s grand opening celebration at the Florida destination.

The 4,485-square-foot Angry Birds Space Encounter, which is included in regular Visitor Complex admission, brings to life the space adventures of the Angry Birds as they follow their kidnapped eggs into an inter-galactic wormhole, come face-to-face with Space Pigs and gear up with heroic superpowers. Visitors encounter six interactive stations designed to engage and immerse guests in a new dimension of Angry Birds Space:

NASA astronaut Donald Pettit, Ph.D., who previously announced from the International Space Station that NASA and Rovio would partner on the creation of the Angry Birds Space game, was also on hand for the grand opening.

“NASA and Rovio have worked together to teach players about physics and space exploration and energize young people regarding future careers in science and technology,” Pettit said.

The original idea for Angry Birds Space came in a Twitter message from @NASA to Rovio that said: “Hey @RovioMobile, our computers are a bit better than they were in ’69. We might be able to help you launch birds if you find pigs in space.”

Entertainment Design Group Inc. of Austell, Ga., developed, built and installed the Angry Birds Space Encounter at the Visitor Complex under the direction of NASA and Delaware North.

The opening of Angry Birds Space Encounter comes a few months before the Visitor Complex will celebrate the grand opening of the new $100 million home of Space Shuttle Atlantis June 29.

Located only 45 minutes from Orlando, Kennedy Space Center Visitor Complex features many attractions and year-round interactive programs, including meeting real astronauts. The standard bus tour, included with admission, explores the history of the Apollo moon and space shuttle programs with panoramic views of Kennedy Space Center, the Vehicle Assembly Building’s (VAB) exterior and a stop at the Apollo/Saturn V Center, where visitors see an authentic 363-foot Saturn V moon rocket and relive the historic Apollo missions that saw man land on the moon.

Visitors also can share mankind’s greatest achievements and future of the space program with the entire family and receive rare access to areas of Kennedy Space Center that have been off limits to the public for decades. The KSC Up-Close Tour Series includes tours of the VAB, Launch Control Center (LCC), and Launch Pad. The VAB tour has been extended through 2013 and the LCC and Launch Pad tours are confirmed through June 30. All Up-Close Tours are $25 per adult and $19 per child (ages 3-11) plus tax, in addition to admission. 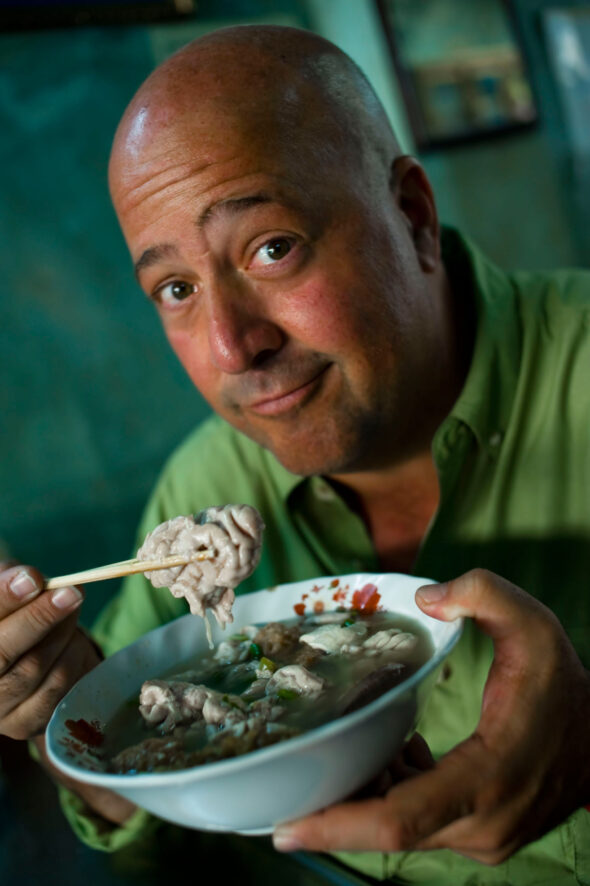 MILWAUKEE, Wis. — Staying true to its promise to provide extraordinary vacations through global travel expertise and resources, Traterra is excited to announce that chef and television personality Andrew Zimmern has signed on to be a travel insider for the new travel provider.

Widely recognized for hosting Travel Channel’s popular Bizarre Foods with Andrew Zimmern series, Zimmern is a two-time James Beard Award-winning television personality, chef, author, and teacher. As a travel insider, Zimmern will play a pivotal role in enhancing Traterra’s product offerings through his food and travel expertise. In addition, he will be featured as a guest blogger and editorial contributor.

“Partnering with Traterra was a logical choice, as they embrace my personal belief that people need to move beyond being tourists, and become true travelers of the world,” said Zimmern. “Traterra is dedicated to creating amazing vacations by helping people look beyond what is right in front of them and experience new things, which is the way I live my life.”

“We are thrilled to have Andrew Zimmern as the face of Traterra, as he embodies the passion and sense of adventure we embrace with our brand,” said Lynn Clark, vice president of marketing for Traterra. “We look forward to working with Andrew and leveraging his expertise to enhance the one-of-a-kind vacations and travel experiences we deliver.” 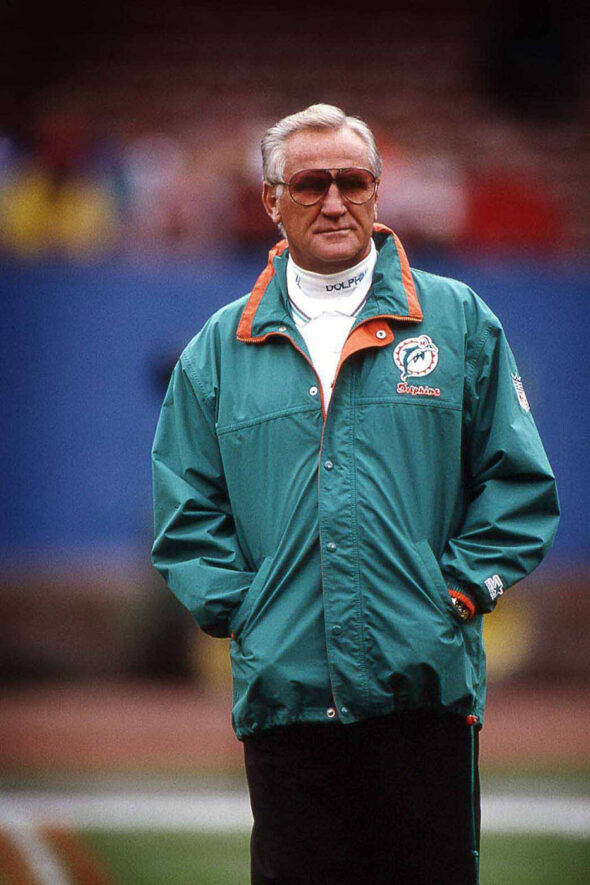 LOS ANGELES — Travelers experiencing football withdrawal during the long months between the Super Bowl and pre-season match-ups can get their fix with some of the game’s greatest minds aboard Crystal Cruises’ summer Baltic cruise. Legendary coach and record holder for most NFL wins ever, Don Shula, Miami Dolphins Hall of Fame fullback Larry Csonka and 31-year NFL veteran referee Jim Tunney will bring their collective expertise and tales from their storied careers aboard Crystal Serenity during a June 15, 10-day Scandinavia/Russia cruise from Copenhagen to Stockholm.

Guests will have the rare opportunity to interact with the Gridiron greats throughout the voyage, as they impart their experiences in leadership, on and off the field, and share inspiring anecdotes of success and teamwork.

“Whether or not one is a football fan, all guests can learn from these experts’ wisdom about success and victory through great team management–disciplines that are applicable to virtually any aspect of life,” says Bret Bullock, vice president, entertainment. “We’re thrilled to welcome these legendary athletes on board for what is certain to be an enlightening and motivating experience for everyone.” 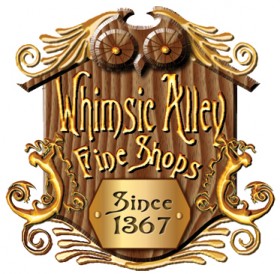 LOS ANGELES — Imagine over 600 Harry Potter fanatics, dressed in their finest wizard robes and brandishing magic wands, descending upon a modern luxury liner. That will be the scene later this year as Whimsic Alley, in association with Princess Cruises, hosts its first annual Wizard Cruise.

The four-night California Coastal cruise aboard the Golden Princess will depart Los Angeles on November 27. It marks a first for both Princess and Whimsic Alley. Never before has such a lavish adventure been offered to members of the Harry Potter fan base.

Whimsic Alley’s Los Angeles facility has been a premier destination for Harry Potter fans worldwide since it first opened eight years ago. Locals and tourists have likened its avenue of intricately designed shops–featuring wands, quills, witches’ hats, curios, wizard jewelry and apparel–to Harry Potter’s Diagon Alley. The Great Hall at Whimsic Alley has been the site of hundreds of parties, teas, balls, banquets and luncheons.

The idea of a Wizard Cruise has been a long-time dream of Whimsic Alley’s creator, Stan Goldin. Each year the “Alley” has conducted summer day camps for kids and a 4-day intensive camp for “so-called” grown-ups. “There are a lot of fan-cons and symposiums around the world each year for Harry Potter enthusiasts,” said Goldin, referring to the types of events that feature discussion panels, art exhibits, and meetings. Such events are extremely popular among the Potter fandom. “Those fan-cons are terrific, but our camps are very different. We fully immerse our campers in the wizard-world experience. For the entire time they’re with us, they become students at a wizarding academy, subject to the challenges and ordeals inherent in that experience.”

Whimsic Alley plans that same type of full-immersion experience for participants of the Wizard Cruise. “Guests will be entertained practically around the clock,” said Event Coordinator Belinda Ervin. “They’ll be overwhelmed. They literally won’t know which way to turn.” Asked about specific activities they are planning, Ervin was deliberately secretive. “We’ve found that part of what makes the experience fun is the element of surprise, so we don’t like to give away too much information ahead of time.”

Goldin stated, “We’ve been soliciting ideas from our fans since last year and have tried incorporating as many of their suggestions as possible. We’re proud to be able to offer this trip on the Golden Princess. We consider Princess one of the world’s finest cruise lines.” Hundreds of people, from all over the world, have expressed a strong interest in being part of the Wizard Cruise. The price of the cruise starts at $650 per person and includes food, lodging, entertainment and activities.

For details about what promises to be a truly “magical” expedition, visit www.WhimsicAlley.com. 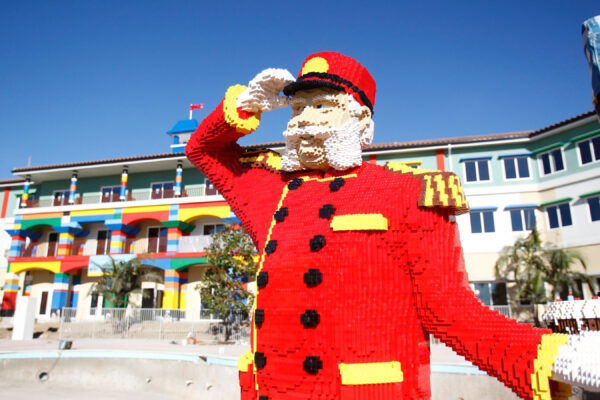 CARLSBAD, Calif. — LEGOLAND(®) California Resort’s General Manager Peter Ronchetti announced new additions, a national Junior Concierge search and employment growth with new jobs to come when North America’s first LEGOLAND(®) Hotel opens April 5. “With annual additions, LEGOLAND California Resort is a multi-day destination proving the need for this multi-million dollar hotel,” said Ronchetti. “With the Hotel comes new jobs and our HR team is filling 250 positions. Not only has the Resort grown tremendously since opening in 1999, but we have truly heightened the economy in the area providing up to 1,610 Model Citizens (employees) averaging 5% growth annually since 2004. Our employment numbers have increased 62% in the last eight years!”

“LEGOLAND Hotel is built for children and geared to maximize the family experience,” said LEGOLAND Hotel General Manager Frank Idris. “With more than 3,500 LEGO models and interactive areas, the Hotel is a great compliment and extension to the experience guests enjoy when visiting the family theme park, water park and aquarium.” Idris has worked in the hotel operation business for more than 20 years, most recently as the Director of Hotel Operations at JW Marriott Las Vegas Resort and Spa.

A national Junior Concierge contest launched today aimed at children ages 8 – 12 who have a passion for LEGO, love theme parks and are adventurous and fun. Six winners will receive a free weekend at LEGOLAND California Resort with their family including a stay at LEGOLAND Hotel, two day Resort Hopper tickets and LEGO products. Each winner will receive full job training and Hotel orientation to share their knowledge from a child’s perspective when serving as Junior Concierge. Applications are accepted online only at www.LEGOLAND.com/JuniorConcierge. Winners will be announced Feb. 28.

“In 2013, a heroic new attraction is arriving to LEGOLAND California as LEGO Legends of Chima is brought to life in an exclusive 4D movie experience,” said Ronchetti. The 12 minute animated 4-D film immerses audiences in the fantastical LEGO world of Chima where tribes of animal warriors compete in epic battles for “CHI” – a mystical energy source of limitless power and destruction. LEGOLAND California launches “LEGO Legends of Chima” March 7 and for the first time, LEGOLAND Parks and Discovery Centers across the globe will all introduce this new product line from LEGO. “And LEGO Star Wars fans rejoice!” continued Ronchetti. “We’ll be gaining another exciting addition in June that will definitely enhance our guest experience.”