June 17, 2020 — PARSIPPANY, N.J. — B&G Foods, Inc. announced that we are initiating an immediate review of the Cream of Wheat brand packaging. We understand there are concerns regarding the Chef image, and we are committed to evaluating our packaging and will proactively take steps to ensure that we and our brands do not inadvertently contribute to systemic racism. B&G Foods unequivocally stands against prejudice and injustice of any kind. 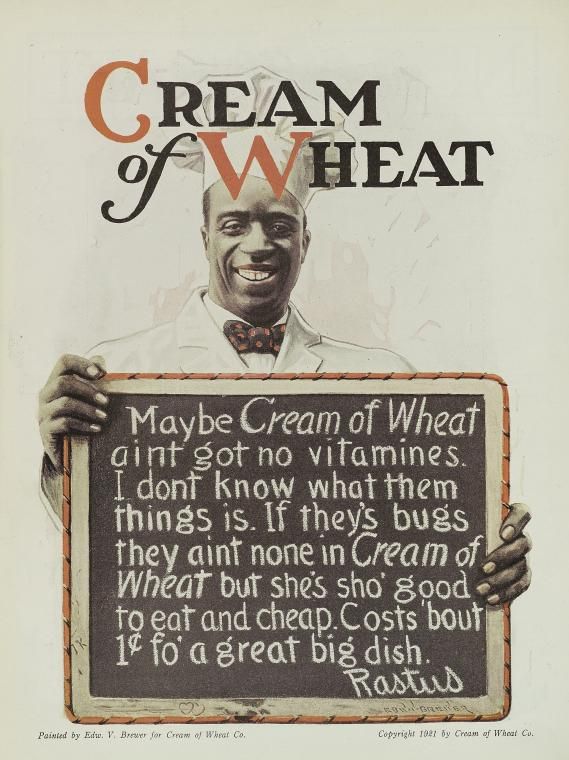 Rastus is a diminutive of Erastus.

The name Erastus is of Greek origin.

The meaning of Erastus is “beloved”.

Erastus is generally used as a boy’s name.

These books and the Disney movie Song of the South (1946) have been pointed at for being racist for years and Disney has refused to show the movie for decades.

Due to these books, some say that “Rastus ” is a derogatory term for black men.

Frank L. White (c. 1867 – February 15, 1938) was a professional chef best known as the model for the fictional breakfast chef (often identified as “Rastus”) still featured on the boxes of, and advertising for, Cream of Wheat breakfast cereal. A native of Barbados, he immigrated to the U.S. in 1875, where he became a citizen in 1890. He was working as a master chef at a Chicago restaurant at the time he was photographed for the cereal box in 1900.

White lived in Leslie, Michigan in his last decades, dying aged about 70 in 1938, and is buried at Woodlawn Cemetery in Leslie. In June 2007, the concrete marker on his grave was replaced with a granite gravestone.