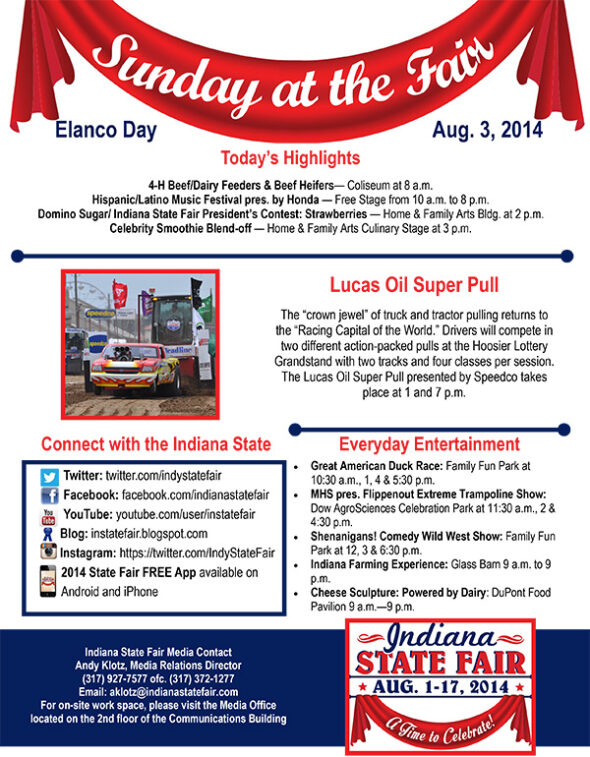 The “crown jewel” of truck and tractor pulling returns to the “Racing Capital of the World.” Drivers will compete in two different action-packed pulls at the Hoosier Lottery Grandstand with two tracks and four classes per session. The Lucas Oil Super Pull presented by Speedco takes place at 1 and 7 p.m. 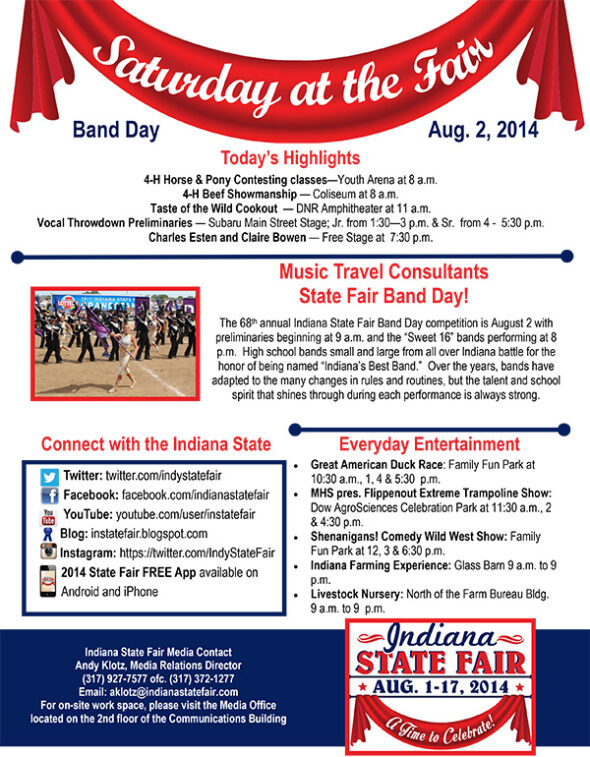 The 68th annual Indiana State Fair Band Day competition is August 2 with preliminaries beginning at 9 a.m. and the “Sweet 16” bands performing at 8 p.m. High school bands small and large from all over Indiana battle for the honor of being named “Indiana’s Best Band.” Over the years, bands have adapted to the many changes in rules and routines, but the talent and school spirit that shines through during each performance is always strong.

No human cases of the virus have been reported in Marion County this year.
Most people who become infected with West Nile virus do not develop any symptoms. People with certain medical conditions, such as cancer, diabetes and kidney disease are at greater risk experiencing symptoms which include headache, body aches, joint pains or rash. Less than one percent of people who are infected will develop a serious neurologic illness such as encephalitis or meningitis.

The Marion County Public Health Department reminds everyone to observe the four Ds of mosquito control to stay protected from bites:

Residents should dump standing water in containers of any size and flush out bird baths every week. Even small amounts of standing water are a potential mosquito breeding ground. Check for unused tires, clogged gutters, small recreational pools and poorly operating septic systems.

The sample of mosquitoes testing positive came from a surveillance trap located in Washington Township. Traps are located throughout the county to monitor the local mosquito population and test for West Nile virus.

No deaths from West Nile virus were reported in Marion County in 2013. 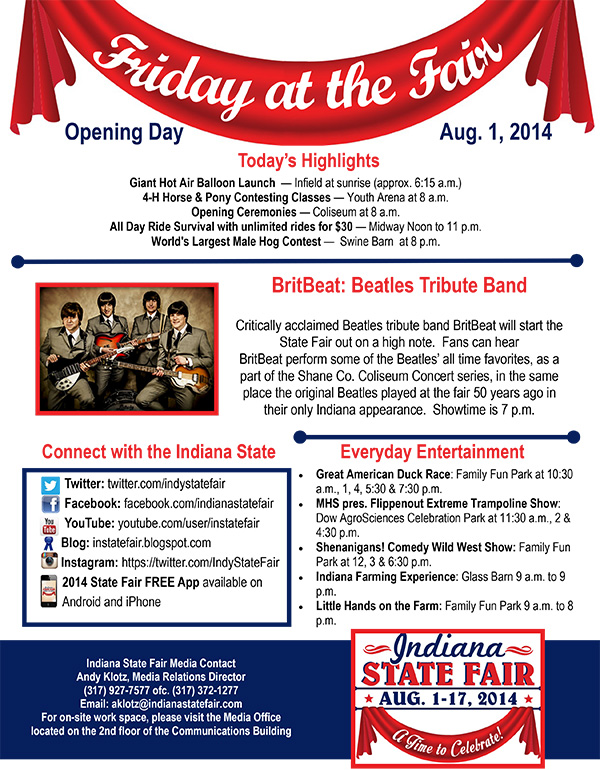 Critically acclaimed Beatles tribute band BritBeat will start the State Fair out on a high note. Fans can hear
BritBeat perform some of the Beatles’ all time favorites, as a part of the Shane Co. Coliseum Concert series, in the same place the original Beatles played at the fair 50 years ago in their only Indiana appearance. Showtime is 7 p.m. 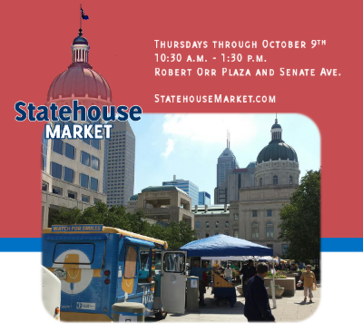 Are you ready for week eleven of the Statehouse Market this Thursday? Van Antwerp Farms brought the first watermelons of the season last week. And Wildflower Ridge Honey’s debuted new jalapeño infused honey! Check out the list below for a list of what vendors are bringing.

Tulip Tree Creamery will also be debuting two new cheeses this week. Trillium which is similar to Brie and Nettle which is a mild Chevre. Both cheeses go great with fruit and baguettes!

This week we also take a trip to Greenfield as we debut our new vendor video with a farm visit to Wilson Farm. The video can be found in the post below and all our video profiles are uploaded to our YouTube Channel.

We welcome back some popular food trucks including Serendipity, Nacho Mama, Little Eataly, Byrne’s Grilled Pizza, Duos Indy and Mac Genie. The weather should be great so we hope to see you tomorrow!

Due to construction issues, the vendors located on Senate Ave will be moved to Robert D. Orr for the day. Only food trucks will be parked on Senate Ave.

Produce Vendors
Check out the list below for a list of what vendors are bringing! Also visit them out on Thursday to see if any extras are brought. 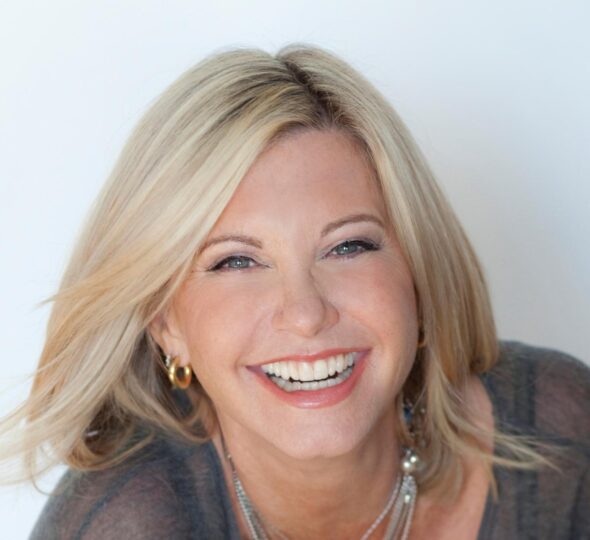 What do the Olympics, the movie “Grease” and Irish Tenors have in common? They will all be represented at 500 Festival events and programs this May. Gracie Gold, U.S. Figure Skater, Olivia Newton-John, Grammy winner and world- renowned performer, and Ronan Tynan, Irish Tenor, have all agreed to be a part of this year’s festivities.

“The month of May is a great tradition with a variety of events to fuel the spirit of Indianapolis. The 500 Festival is very excited to welcome Gracie, Olivia and Ronan to be a part of the tradition. These three are truly remarkable people to whom we are grateful for their participation and look forward to their spirit and enthusiasm as a welcome addition to the festivities of May,” said Bob Bryant, President and CEO, 500 Festival. “We could not ask for a better start to our celebrity commitments to 500 Festival activities. This year’s month of May is sure to be one of the best ever.”

Gracie Gold, reigning U.S. Figure Skating Champion and U.S. Olympic team member competing in the Winter Olympics at Sochi will be coming to Indianapolis for the IPL 500 Festival Parade as a VIP participant. Gracie is 18 years-old and one of the U.S. medal contenders at the XXII Olympic Winter Games. Gracie, daughter of Denise and Carl Gold, has a twin sister, Carly. Gracie, who is just 18 years old, already has a gold (2014) and silver (2013) medal in the U.S. Championships and a silver medal at the 2012 World Junior Championship.

It was also recently announced that Olivia Newton-John will be heading to Indianapolis as a participant in the OneAmerica 500 Festival Mini-Marathon.  She will be joined by her nephew, racecar driver Emerson Newton-John, as they generate awareness for Pink and Blue for Two, a charity co-founded by Emerson. Pink and Blue for Two is a breast and prostate cancer awareness charity dedicated to promoting the importance of early detection. Olivia is a four-time Grammy winner and a nine-time American Music Award recipient. One of the most well-liked global entertainers, Olivia has experienced over 50 years of success with 18 concerts tours around the world and is widely known for her starring role (Sandy) in Grease with John Travolta, released in 1978. Olivia, survivor of breast cancer in 1992, has been an advocate for health awareness for her hospital, Olivia Newton-John Cancer and Wellness Center in Australia, and Pink and Blue for Two.

Famed Irish Tenor, Paralympic athlete, motivational speaker and orthopedic doctor, Ronan Tynan will be heading to Indianapolis this May to participate in the 500 Festival Memorial Service presented by Rolls-Royce and in the IPL 500 Festival Parade. A modern day “Renaissance Man”, Ronan competed in the 1984 and 1988 Summer Paralympics, winning a total of four golds, two silvers and one bronze medal. Ronan is also well known for his singing of ‘Amazing Grace” at President Ronald Regan’s funeral and multiple performances of “God Bless America” at Yankee Stadium. Ronan was born with phocomelia, causing both of his lower legs to be underdeveloped, and at the age of 20 had his legs amputated below the knee after a car accident. Despite all of the obstacles Ronan has faced, he is a phenomenal success story that is an inspiration for passion and determination.

It’s the largest and most anticipated black-tie fundraiser in Indianapolis, drawing thousands of people annually for an adventurous evening of amazing entertainment and delicious delicacies from 70 of the area’s top restaurants.

Tickets for Zoobilation 2014 presented by Indianapolis Power & Light Company go on sale at 9am Feb. 3 exclusively on the Indianapolis Zoo’s website, and the event always sells out fast. Now in its 28th year, this premier philanthropic gala will take place from 7pm to midnight June 13, and the Zoo will be closed that day in preparation for another unforgettable evening.

The theme for Zoobilation 2014 is Rock Your Orange: Party For the Orangutans in honor of the spectacular new International Orangutan Center. Zoobilation will roll out the orange carpet to introduce these great apes in style. Guests will enjoy an elegant evening with exclusive access to the Center and its orangutan residents just three weeks after its May 24 public debut. Party goers will also sample a diverse selection of food and beverages from some of Central Indiana’s best eateries while enjoying live entertainment from some of the area’s hottest acts presented by Bose McKinney & Evans LLP. Restaurants compete for the coveted blue ribbon awards as well as the People’s Choice Award presented by ChaCha. A limited number of guests can upgrade their ticket to enjoy the Premium VIP Experience presented by the Scott A. Jones Foundation and ChaCha. From 5:30 to 7pm, VIP guests will receive exclusive benefits including priority parking, an arrival gift, full access to the air-conditioned Oasis Lounge in the Dolphin Adventure Gallery and more.

Zoobilation attendees will experience the party of the year while supporting the Zoo’s mission of advancing animal conservation. Last year, this lavish evening raised $1.6 million to help fund the care and feeding of the more than 2,000 animals and 16,000 plants in the Zoo’s collection. The event also supports the Zoo’s global animal conservation initiatives. 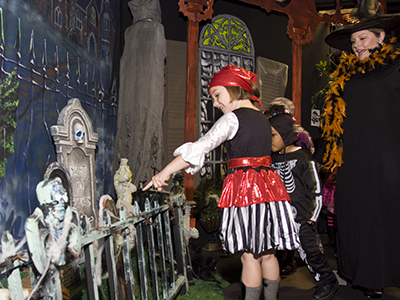 Due to changes in many community trick-or-treat plans because of expected inclement weather, The Children’s Museum Guild decided to keep the Haunted House open until 8:30 p.m. on Oct. 31 offering children and families a safe and dry place to celebrate Halloween.

The house will be decked out for IPL’s Lights-On Hours recommended for children who scare easily. Friendly-faced greeters will be passing out treats allowing children and families an alternate way to trick-or-treat. This year’s theme,Time Warp , takes families on an awfully amazing journey back in time to explore five “deadcades” of movies, music, television, and history through a terrifying Time Warp. New this year–see it in 3-D!

Tickets are $7 per person ($6.50 per member) and can be purchased online or at the door.

Every year on Halloween night, children dress up in their favorite costume and walk from house-to-house in search of treats. The Marion County Public Health Department is offering important tips to help all little ghosts and goblins have a safe trick-or-treating experience.

Costumes should be the right size to prevent trips and falls. Decorate costumes and bags with reflective tape or stickers and, if possible, choose light colors. Choose face paint and makeup whenever possible instead of masks, which can obstruct a child’s vision. And, have kids carry glow sticks or flashlights to help them see and be seen by drivers.

As a service to the community, the Marion County Public Health Department will offer free costume inspections at 3901 Meadows Dr. from 3-6 p.m. on Oct. 31. A consumer product safety specialist will check costumes for potential dangers such as trip hazards, obstructed view and choking hazards. Kids will receive a reflector sticker as proof of inspection, safe trick-or-treating information and a spooky treat!

Children under the age of 12 should not be alone at night without adult supervision. If kids are mature enough to be out without supervision, remind them to stick to familiar areas that are well lit and trick-or-treat in groups.

When the night is over, parents should examine the child’s bag before any candy is eaten. Bags should be checked for small toys like spider rings and other items that could be a choking hazard for kids three years old and younger. Remind children to only eat treats in original, unopened wrappers. Candy should be thrown away if the wrapper is faded or torn.

For more information about Halloween safety, or to ask questions, contact the Marion County Public Health Department at 317-221-3360. 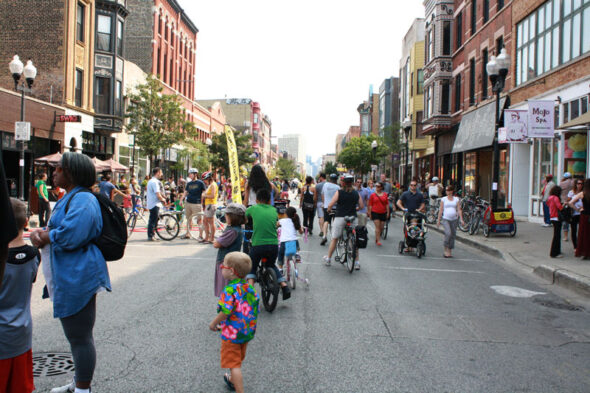