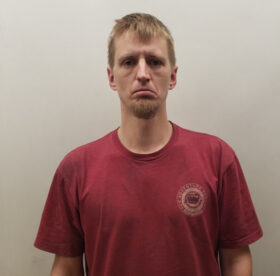 Clark County – A Marysville, Indiana man was arrested early Wednesday morning after fleeing from police and leading them on a high-speed pursuit.

Around 4:30 Wednesday morning, Trooper Steven Peyton observed a silver Mitsubishi Eclipse traveling at a high rate of speed on SR62 near Bull Creek Road, a few miles east of Charlestown.  Trooper Peyton obtained a speed of 75 miles-per-hour in and 55 mile-per-hour zone and attempted to stop the car.  The driver then turned onto Vesta road and fled from Trooper Peyton, at times, traveling in excess of 100 miles per hour and running stop signs.   The driver eventually circled back on county roads towards SR 62 and Bull Creek Road where Trooper Rob Caudill deployed “Stop Stick’s” and successfully deflated all four tires on the Eclipse.  The car then continued east SR62, turning onto Oscar Long Road, where the driver lost control and slid off the roadway and into a ditch.

All subjects are presumed innocent until and unless proven guilty in a court of law.